← more from
Secret City Records
Get fresh music recommendations delivered to your inbox every Friday. 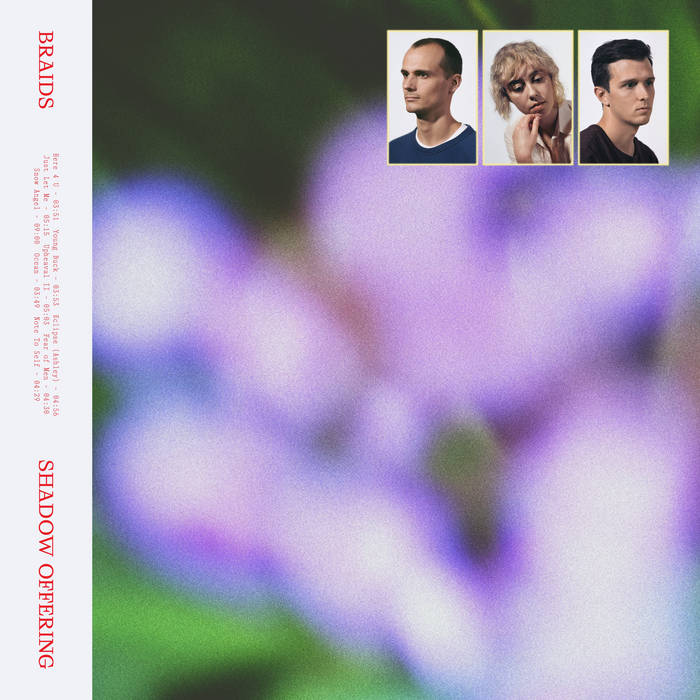 ethereal_space Vulnerability and artistry combined into one.

swartsie I have been following Braids for quite a while now and have been waiting & waiting for this recording to be released !
& let me tell you it was worth the wait ! The song "Just Let Me", caught my attention right away & I am obsessed with this song ! Raphaelle's voice is sooooo beautiful, that it sends chills down my spine... seriously ! I hope Shadow Offerings does well on the charts and the band financially in these tough times and next year you win a "Juno" because Braids, you deserve it !

David Knights Cowling An album that deserves a world to be played into; nevertheless, this document represents these marvels aptly.

Braids have been taking the time and space necessary for little miracles to occur. Burrowed in their Montreal studio, the band has spent the better part of three years crafting Shadow Offering, their 4th album, due out in June 2020 via their new label home, Secret City.

Unlike previous albums, Braids decided to stay close to home for the recording of Shadow Offering. Taking over a spacious sound recording studio tucked in an old warehouse, the band were able to slow down and creatively rediscover themselves. “With this album, we wanted to give ourselves time to achieve a higher caliber of artistry and collaboration,” Tufts says. No longer riding the novelty of youth, the band deliberately took time to recommit to themselves and their craft, and channel new energy into their music. They wrote 40 songs. They went through their Saturn Returns. They learnt how to support one another better. They drank a lot of La Croix.

The band sketched and re-sketched new material for eighteen months before lucky circumstance found Chris Walla (Death Cab For Cutie) renting out space in their studio. The four began wandering into each others’ rooms, curious about each others’ projects. Typically opting for a private and insular creation process, the friendship between the four saw the band sharing their songs with Walla, and naturally resulted in Walla co-producing and engineering Shadow Offering. Pushing the band out of their comfort zone, he at once broke and unified the band’s dynamic, unearthing individual creative energy long buried over the years. With a new sense of confidence, listeners will find Braids at their most personal, unabashedly flexing through their new music.

A luscious and expansive release, Shadow Offering leads us through a sonic tapestry of narrative. With heart-breaking honesty and precision, listeners traverse a nuanced and complicated world: one full of beautiful contradiction. Although the album directs itself at the failures of people to love and be loved, it also seeks to restore justice and attain blissful union. Its arc crests through the dark towards the light and learns how to dance with the dizzying rhythms of the heart. The songs bubble, sustain, dissolve, expand, retract.

The creative process saw Tufts exploring groovier and more supportive rhythms, while Standell-Preston and Smith picked up their guitars in a serious way, something they hadn’t done since Native Speaker. ‘Young Buck’, Shadow Offering’s lead single, sees Braids at their most playful and confident. An effervescent ode to impossible love, it exudes an undeniable magnetism reminiscent of the band’s breakthrough works ‘Lemonade’ and ‘Plath Heart’.

With Shadow Offering, Standell-Preston’s voice is visceral as always, conveying a new confidence and rawness we’ve yet to hear from her. Fans of commanding 90’s songwriters like Fiona Apple and Alanis Morissette will relish in her voice’s strength and lyrical aptitude. ‘Snow Angel’, an unhinged performance from Standell-Preston, has her leaning passionately into her anger. “You’re allowed to be angry, don’t shy away from it because you feel you have to,’” Standell-Preston recalls Walla saying. Validated and encouraged, Braids’ frontwoman dove deeper into her frustrations and anxieties about her internal and external worlds.

‘Snow Angel’, in effect, is the album’s core. Across its sweeping 9-minutes is a diary entry literally exploding beyond the boundaries of the page. Standell-Preston desperately seeks a mere inch of belonging “Amongst all the madness, the chaos / The need to march in the streets / Fake news and indoctrination / Closed borders and deportation”. Surrounded by klangy guitars and unrelenting rhythm, she plunges, and deliberately feels it all at once; when a dying house plant, the climate crisis, another cracked iPhone screen, and the endless barrage of both content and destruction all carry equal weight in driving oneself to scream in madness over what it means to be alive in the modern world. Falling from the song’s zenith, she is left aching for peace within the chaos distinctive to her Millennial generation: “Can I get off of this ride / I’m feeling dizzy / It’s moving way too fast / And I wanna come down”.

Although the album recounts pain, heartbreak, anger, it also lifts the heart towards hope. “There’s more hopefulness in this record than anything else I’ve written. I think the songs are more human, more tangible, more honest,” Standell-Preston says, referencing therapy and her transcendental meditation practice as helping her through the rhythms of her life. “I showed up for my heart on this record. I really showed up. From the start to the finish.” No better is this reflected than in ‘Eclipse’, an album standout. Dedicated to the singer’s best friend Ashley, it’s a song that sinks deep into a feeling of reverie for nature, the love found in friendship, and the vital nature of personal reflection:

…What eclipses me in my life?”

“Parts of us get eclipsed by certain experiences and behavioural tendencies, trauma and societal programming,” Standell-Preston says. To take those parts and create a beautiful arrangement for listeners to feel solace and pleasure in, that is Braids’ offering. “This is what we offer back, this thing we have created. It was fueled into existence via the magnitude of our life experiences. We’re offering the abstraction of it back. This is the shadow it casts,” Smith says.

The definition of an eclipse is “the total or partial obscuring of one celestial body by another.” In many ways, Braids have crafted a balm with Shadow Offering to combat the dark forces that cross us. To overcome the fears that plague us, the planets eclipsing our planetary bodies, the patterns that bind us, the anxiety that grips us, the heartbreak that breaks us. The balm is the perfect antidote to such darkness and chaos: that of hope, pleasure and, above all, always love.

Braids, comprised of Raphaelle Standell-Preston, Austin Tufts and Taylor Smith, are a Montreal-based three-piece. Formed in 2007 in Alberta, they have solidified a decade-long reputation for their musical ingenuity and established themselves as one of Canada’s most acclaimed art rock bands. Their albums include Native Speaker (2011), Flourish // Perish (2013) and Deep In the Iris (2015). Shadow Offering is out June 19th 2020, via Secret City Records.

Recorded by Chris Walla at Studio Toute Garnie in Montreal

Produced by Chris Walla and Braids

All songs written and composed by Braids

BRAIDS are a Montreal-based, three-piece band. Formed in 2007, they have solidified a decade-long reputation for their musical ingenuity and established themselves as one of Canada’s most acclaimed art rock bands. With Standell-Preston’s vocals as the pillar of their sound, BRAIDS weave organic and electronic elements together amidst a lyrical landscape that is intimate and emotionally-immersive. ... more

Bandcamp Daily  your guide to the world of Bandcamp